Liver transplant of Infant in Kochi 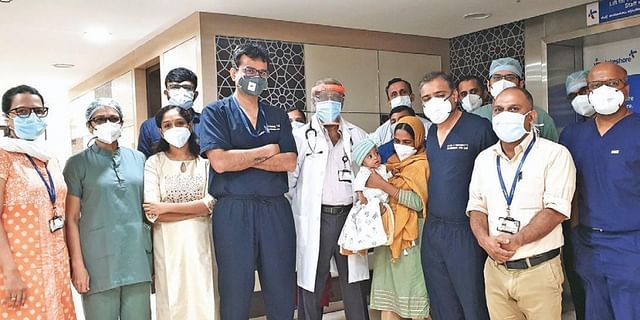 Belonging to Androth island in Lakshadweep, the baby had symptoms of jaundice including yellow eyes and dark urine shortly after birth, and was diagnosed with biliary atresia.

KOCHI: A six-month-old baby from Lakshadweep underwent a successful liver transplant surgery at the VPS Lakeshore Hospital in Kochi. Fathima Filza, daughter of Mohammed Fathahuddin A P and Sareena K C, was suffering from congenital liver disease that demanded
an early liver transplant for her to survive.

Despite many hurdles, including the Covid pandemic and the travel restrictions to move out of Lakshadweep, the surgery was performed successfully by the Comprehensive Liver Care team at the hospital. Fathima’s mother Sareena was the donor, and according to the hospital authorities, both the child and mother are doing well. They were discharged on Saturday.

Belonging to Androth island in Lakshadweep, the baby had symptoms of jaundice including yellow eyes and dark urine shortly after birth, and was diagnosed with biliary atresia. In spite of surgery when she was two months old, her condition worsened rapidly due to recurrent infections.

“Liver transplant in babies is a challenging and difficult procedure, especially in babies so small,” said Dr Abhishek Yadav, chief liver transplant surgeon, and director of the Comprehensive Liver Care Institute at Lakeshore.

“One challenge we faced was the very small and undeveloped portal vein, the main blood supply to the new liver. The surgeons overcame this problem by modifying a stent originally designed for neck vessels in adults and placing it inside the child’s portal vein during the surgery.

The second problem was a variation in the hepatic veins of the mother which was overcome by using a piece of blood vessel harvested from a brain-dead donor at Thiruvananthapuram. She also the smallest baby to undergo portal vein stenting which is only available in two or three centers across the country,” he said. VPS Lakeshore is also one of the few centers in the world to have a success rate of over 90% in pediatric liver transplantation, hospital authorities said.

Along with Dr. Abhishek, a team of over 25 doctors — including Dr. Navaneethan Subrahmanian, Dr. Fadal Veerankutty, Dr. Dharav Kheradia, and Dr. Nita George — and other support staff was involved in the baby’s treatment.

Dr. Abhishek Yadav is a well known gastrointestinal, liver diseases and liver transplant specialist with more than 10 years of clinical experience in managing patients with complex surgical problems of the liver and gastrointestinal tract.